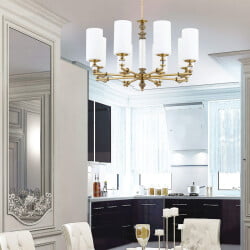 7 Luxury Lighting Trends You May Have Missed 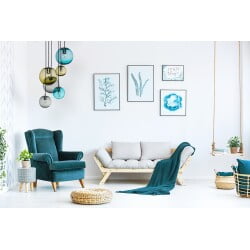 How to Choose a Modern Chandelier

How We Work with Interior Designers

The History of the Chandelier

First created more than 500 years ago, the chandelier is a luxurious piece of interior decoration which speaks of beauty, opulence, triumph, power and social standing.

Since their humble beginnings, chandeliers evolved through the ages to become the complex, beautiful and impressive focal points that they are today.

Here is a brief history of the chandelier, from the 14th century, through the transformations of the following centuries until today.

When chandeliers first emerged in 14th century France, they were very simple and functional. Usually made from two pieces of wood overlaid to form an ‘x’ shape, they were lit with candles held in place with rustic spikes.

Their modern name is an adaption of the French word ‘chandelle’ which means a (hanging) candle holder.

Despite their appearance, these types of chandeliers were already a sign of status. Candles were still expensive and were only used in castles and royal palaces.

By the 15th century, the design of the chandelier begins to change. We start to see complex chandelier design based around a ring or crown design. This was aimed to showcase the creativity and financial status of the owner.

Over the next two hundred years, chandeliers began to make their way into a greater number of working-class homes. These chandeliers used materials such as wood, iron or tin to form the structure and they continued to be lit by candles.

For those more exclusive chandeliers used by the rich, the main material used for decoration was rock crystal– a rare, semi-precious and very expensive stone also known as quartz. These were built around gilt or metal silver frames and took a great deal of time to make.

Chandelier design entered into a golden era during the 18th century.

Thanks to the advancement of the glass-making industry, it was easier than ever to produce impressive pieces at a more affordable price.

Designs of this time also featured long, curving arms made from cast metals or carved and gilded wood and often displayed an impressive number of candles. It was at this time that Swarovski started producing cut stones which could be used in chandeliers.

With the widespread use of gas at the beginning of the 19th century, many chandeliers switched to gas light instead of candles. These were known as ‘gasoliers’ and were much safer to use.

Towards the end of the century, the electric light was invented and became increasingly widespread and dependable over time. This meant that, again, chandeliers were converted from gas (and sometimes candles) to electricity.

Of course, electric lights were even safer than gas or candles and made it easier for every home to enjoy.

Today, Chandeliers are used as a way of lighting a space with style and provide an impressive focal point to a room.

It’s also easier than ever to find a chandelier design that is perfect for your space and your tastes without breaking the budget.

Whether you’re looking for a crisp minimalist design, an opulent, luxurious design or a more gothic feel, you’ll find the perfect model in our exclusive online catalogue.

For more than half a century, chandeliers have continued to evolve.

Once just a simple wooden cross bearing candles, these days they are more complex, elaborate and altogether impressive than they ever have been. With continual improvements in craftmanship and material quality, chandeliers look set to be around for many more years to come.

Our luxury chandeliers are hand-picked to offer you the finest lighting solution that money can buy. Browse our range of designs in our exclusive online boutique.

Could you tell me the history of the crystal chandeliers that have an orb shaped wrought iron or forged iron outer cage!? I was given one from a person in the historic French Quarter of New Orleans when they were renovating their building. Thank you.

What Size Chandelier Do I Need?

Welcome to the Versace Collection 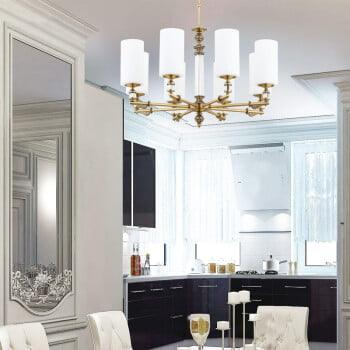 7 Luxury Lighting Trends You May Have Missed

How to Choose a Modern Chandelier

How We Work with Interior Designers